Christine Payne-Towler has been an esoteric researcher and practitioner in the Pacific Northwest since the 1970’s.  She wrote the core interpretive Tarot text that launched the seminal and ever-popular website www.Tarot.com during 1998 and 1999.  Simultaneous to the website’s appearance, her first book was released, entitled The Underground Stream; Esoteric Tarot Revealed. In 2005 her blog site at www.TarotArkLetters.com commenced, where she has been sharing her research articles and astrological analysis ever since.  In 2007 she appeared in Part I of the 2-part series Secrets of the Occult, dedicated to the magicians of the Renaissance. This documentary by Hidden Treasures Productionsis dedicated to exploring issues raised in the popular Dan Brown novels.  In 2011, Christine and husband Michael Dowers released the Tarot of the Holy Light, which quickly garnered the distinction of being voted the 6th best deck of 2011 at the international Tarot watering-hole, Aeclectic Tarot (http://www.aeclectic.net/tarot/). Christine has recently produced two videos under the title AstroTheology: The Thin Spindle of Necessity, to help modern occultists understand the ancient roots of the esoteric arts. She has also released a pair of self-produced books entitled Tarot of the Holy Light; A Continental Esoteric Tarotand Foundations of the Esoteric Tradition. She is currently writing articles on esotericism for  the Jung Journal; Culture and Psyche, an international psychology magazine out of the San Francisco Jung Institute. Christine can be reached for private consultations, presentations or interviews by calling 360-859-4857, or e-mailing her at www.tarotuniversity.com. 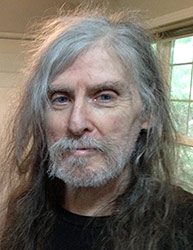 Michael Dowers has always leaned towards the world of graphic arts since he was a senior in high school in 1968. Learning the craft of printing with small printing presses in the business world.

In 1982 Michael started publishing comic books under the guise of Starhead Comix  and worked for the next 16 years learning about the business side of the comic book industry. Working for other publishers and distributors over the years leaving a strong sense of how the comic book world operates.

With 9 years experience for Fantagraphics books from warehouse manager to Eros Comix editor and many jobs in between, Michael Dowers has had a lifetime of self publishing experience.

Now coupled with the creation of a new tarot card deck and Christine Payne Towler’s knowledge of the spirit world…we begin a new chapter in the creative world of graphic arts.